Through each one of us on the team, so much went on, but to explain it’d be a challenge because, sometimes, it’s hard to put the heart into words, but from time to time, I’ll attempt to show you parts of mine.

One thing that I saw throughout the convention was hope. I mean, on the outside, it was easy (and sad) to see what was going on: how people were in a trance (both the men and the women; both attendees and workers); the craze in their eyes; the I’ve-gotta-have-more look; etc, but beneath it all, I saw hope because of my life.

You see, I used to “be” like them: in a world where sex was a sport and dancing was a competition; where manipulation was the key to money; where hands touching me made me feel beautiful…I get it; I was there, but that’s not where I stayed, so because of that, I saw hope.

To be in that environment again and NOT have it affect me was the power of the gospel in action, but there were others who KNEW the gospel yet were part of the show.

When I approached her with a gift, she was very receptive. When she found out there was a bible inside, she was SO excited! I didn’t just hand it to her and walk away, though. I wanted to find out “who” she was, so I stayed with her for awhile.

In discovering her soul, I learned she was a writer but has had writer’s block for two years, so I shared with her my writing and prayed over her. I also shared with her about Scott, so she asked for prayer for restoration of a relationship. It was so good to listen to her, yet I walked away baffled.

How common is that in the church: justification. living for God yet living for self? I wonder if people have conviction confused with condemnation. Yes, there’s no condemnation through Christ, but there’s conviction from the Holy Ghost that should be listened to. Conviction is the beginning of freedom, but you have to follow its lead.

Anyway, over the weekend, my heart was heavy with thoughts for the women. I don’t doubt their eventual freedom, and I also don’t doubt some of the feelings they’ll endure along the journey. I’ve experienced such intense feelings of guilt, regret, filth, unworthiness, etc, that I’d never wish on anyone, but again, I KNOW there’s ultimate freedom from it all because I’m living it, so I’m always brought back to hope, which is a very good thing.

I’m so grateful I have a husband who encouraged me to go back this year. It really is a powerful thing to be present where you used to be trapped and share with people an unbelievable hope. Over the weekend, many seeds were planted, so let the water fall and nurture them, as God watches them grow!

Sheri talking with one of the men in charge of the stripper pole in the background. That’s the one we were across from. 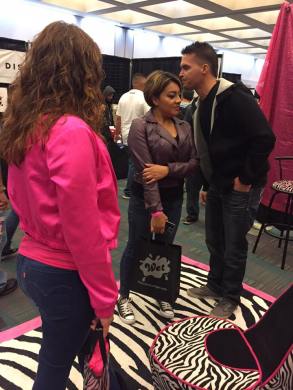 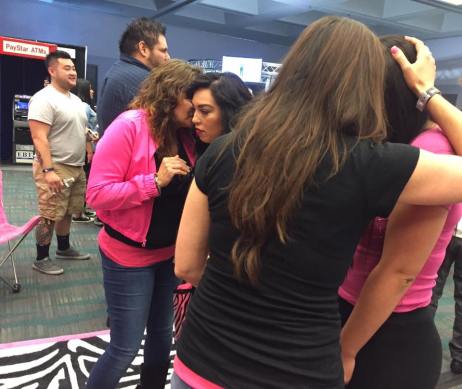 Me and Janel praying

This couple owned a villa and were there at a booth to gain reservations.

Eric talking to a gentlemen, while everyone in front of them were entranced by the dancer on the pole.

There’s a story behind this photo, but not everything can be shared. 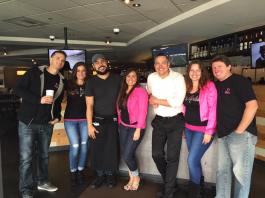 Ministry happens wherever we go. That’s the manager and our waiter, both received goodness from heaven!