Yesterday, Carolyn had her last band competition in LA, which was too far for me to travel: I didn’t have the money or the gas, so we both knew I wouldn’t’ve been able to make it, and since we’ve been bonding a lot lately, that was hard on both of us.

She was supposed to arrive back at the school at 1:00 AM, so before I went to bed, I set my alarm, and before I did that, I sent her a text of how I loved her.

After ten, she responded with what a hard day it had been. She’d endured it with pain and tears. She was tired and couldn’t wait to be home, and in her text, she put, “Mom, you don’t even know,” so I knew there was more to her day than just pain.

When I picked her up at 1:00 AM, she was hobbling, carrying three roses in a water bottle. As we drove, she talked about her day.

She told me about how, because it was their last competition, all the seniors were given roses and were to walk down the line of other students and give them hugs goodbye. When one girl made it to Carolyn, she made her cry.

For a while, Carolyn has felt like an outcast in band. She’s totally a leader and not always “sweet.” If something needs to get done, she delegates, helps, organizes, etc., and with all of that, sometimes it’s a little tougher to be liked.

Carolyn had felt so cast out, at times, she almost quit band and definitely decided not to go back next year. After last night, all that changed.

As this one girl reached Carolyn to hug her, she gave her her rose and told her how much she appreciated her, how she’s watched Carolyn and seen how hard she works and knows all the things she does for everyone and also knows how she’s never appreciated. It absolutely melted Carolyn.

She’d thought she was invisible, that no one liked her. She hadn’t really made any friends and felt rejected on a constant basis, and there she was, listening to someone (who didn’t like her the year before) praise her for who she was and how she led others. After that, the domino effect of goodness began. 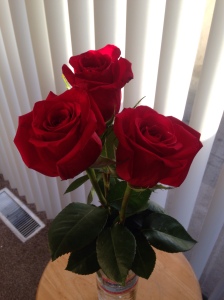 Another senior, a young man, hugged Carolyn and gave her “his” rose, and afterward, another senior gave Carolyn “her” rose.

After their performance, they waited in the stands until the end to hear the awards and hopefully earn one for their school. While sitting in the cold, a parent bought Carolyn dinner and a senior boy sat close enough to Carolyn to share his jacket with her. Another girl gave her a blanket to use, so she could lay down and sleep.

There were many other instances throughout the day of people helping Carolyn, protecting her, watching out for her. She was so surprised time and time again, so when I picked her up, she was an absolute mess!

After listening to her heart about the love that was poured into her, I couldn’t help but mention to her how it was like God was showing her how proud He was of her all day long. She agreed and cried some more.

When we got home, she tried to eat something but didn’t feel well and ended up sick in the bathroom. (She is not a fan of throwing up!) I prayed over her and stayed with her until she fell asleep.

I’m glad I wasn’t there yesterday. If I was, I might’ve gotten in the way of what God wanted her to see. Because of yesterday, Carolyn wants to be in band next year.

I know my baby girl will wake up different this morning. The difference between feeling rejected and being accepted causes a shift in one’s self that never goes away!